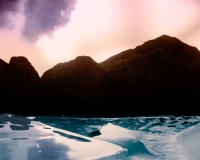 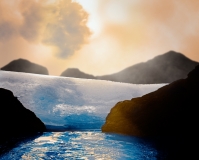 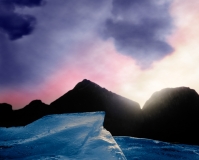 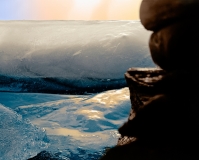 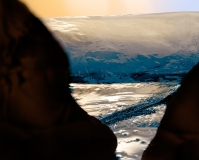 Ablation Points depicts ­­glacial scenes as an extended metaphor for climate change. The images are digitally enhanced photographs of miniature model landscapes constructed in the studio. Large-format photographs are made quickly as the scenes melt. Through this process, singular moments are captured that lend themselves to mythical visual statements.

In recent years, glacial regions have received increased attention as the effects of global warming become alarmingly evident. Ice thousands of years old is melting at unprecedented rates. The term ablation refers to a net loss of ice due to increased melting. Once epitomizing the term “glacial pace,” these processes are accelerating, repositioning our conceptions of time from the geological to the human. This glacial swan song is ominous. My hope was to convey disturbing notions of loss around this cataclysmic, unfolding disaster. The camera’s glance captures a specific moment in flux. The ice once was, but is no longer.